The Clarence Thomas myth that refuses to die 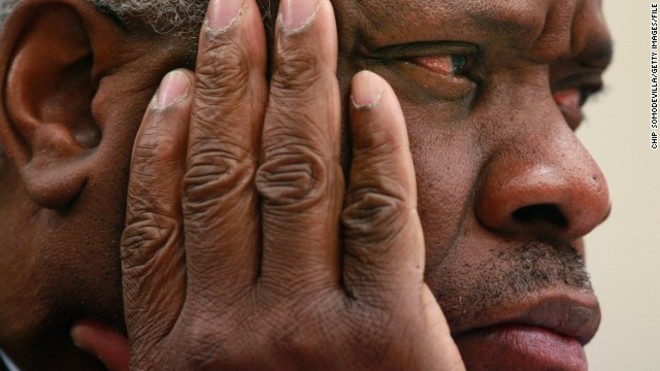 It's the horror movie villain that won't die, the pop song you can't get out of your head, the out-of-town guest that just won't leave.

It's a belief that's stuck like a tick in the collective memory of some white conservatives.
It's the notion that black people despise Clarence Thomas because he's a conservative.
It's not only a myth but a con. Here's why it matters now.
We are about to hear a lot about, and from, the only black member of the US Supreme Court. A new Thomas biography, "The Enigma of Clarence Thomas," is generating buzz. A new PBS documentary, "Created Equal: Clarence Thomas in His Own Words," comes out next year. And a Washington Post writer recently dedicated an entire column to Thomas, calling him "an American hero."
It's all adding up to another public reappraisal of arguably the most conservative member of the Supreme Court. He's someone more people would revere if they only knew him better, says columnist Kathleen Parker.
Here's my question to people who say or imply black people revile Thomas because he's a conservative: If black people are so opposed to conservatives, why have so many accepted black conservatives such as Booker T. Washington, Colin Powell and Condoleezza Rice?
Visit www.cnn.com to read the full article.
Share
Tweet