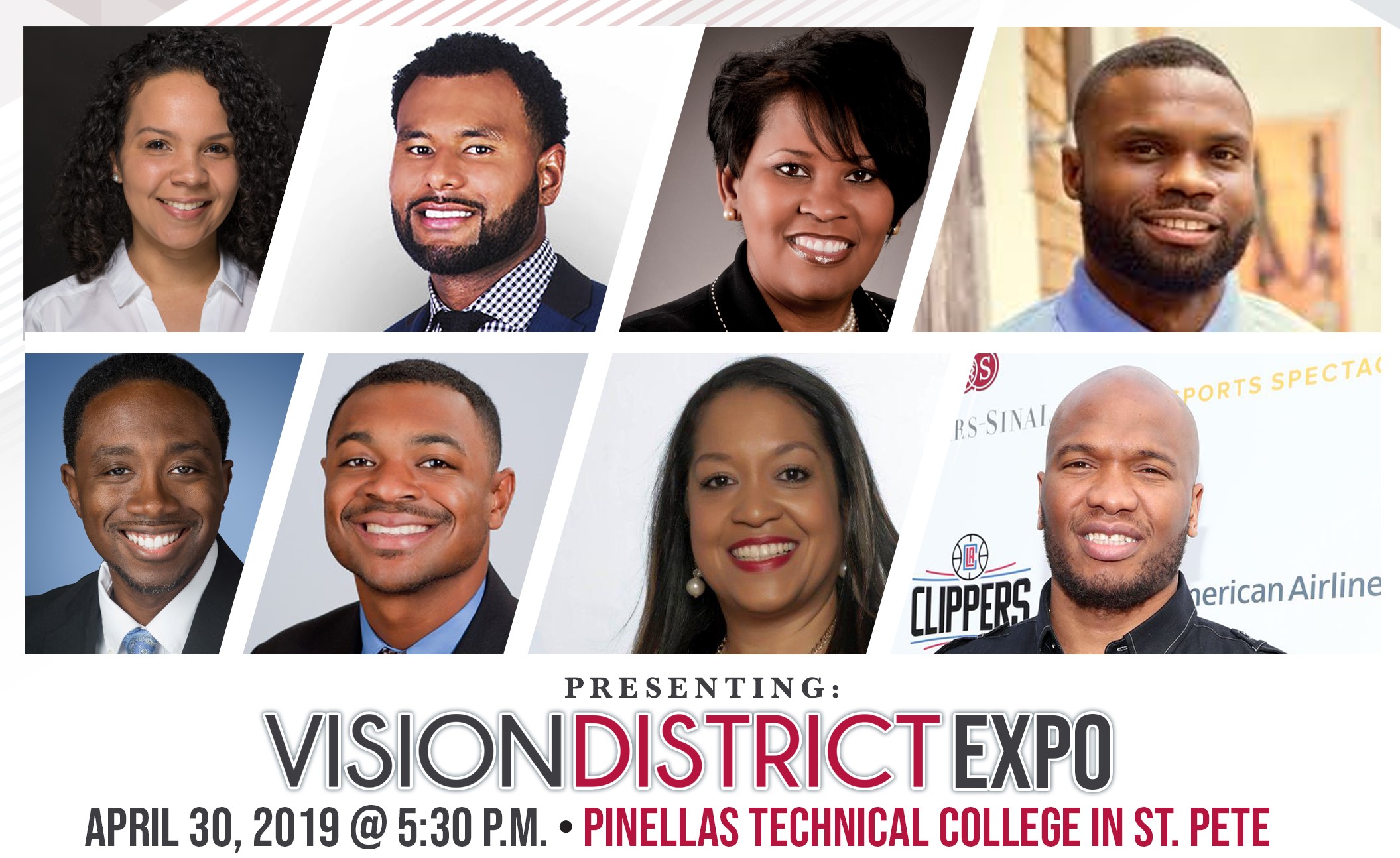 “What can we do to grow the economy of ‘black St. Petersburg?’” That was the question that drove a group of 50 community leaders who’ve invested the past year in exploring the 18 “Big Ideas” that will be unveiled next week at the event dubbed VISIONDISTRICT Expo.

Dominating the list of “Big Ideas” were collective real estate investments and entrepreneurial incubators, and Millennials dominate the field of people bringing their concepts to the table.

The Expo is part of a one-year planning process for the emerging One Community Plan, a project funded by the City of St. Petersburg to help create a new approach to economic equity for Florida’s 5th largest city. The project is housed at Pinellas County Urban League.

It will be the visionaries themselves who display their brainchildren at the April 30th Expo.

Roy and Izabelle James will exhibit their idea for VISION Investors, a real estate investment collaborative like the Tulsa Real Estate Fund, which launched last year and within months had crowdsourced $10 million in investments ranging from $500 to $40,000. The couple owns James Insurance Solutions.

Nine-year NFL veteran Louis Murphy, Jr. and NBA Champion Marreese Speights will creatively display their concept for a world-class pro athletic training center similar to O Athletics in Houston. Their vision is for a joint venture among pro athletes born and raised in St. Pete.

Murphy, a former Tampa Bay Buccaneer, sees the facility as not only a magnet of economic activity and job creation, but a hub for engaging more young people in positive spaces.

Florida Housing Coalition’s Ashon Nesbitt will showcase the Coalition’s Smart Hub concept to revitalize the 62,000 square foot Skyway Plaza that currently sits with its anchor space vacant after the department of Sweetbay grocery store. Nesbitt is a Lakewood High graduate who went on to earn degrees from University and Florida and FAMU.

Technologist James Faison will present his concept for The Mainframe, a Tampa Bay-based initiative to support the growth of black technologists, professionals, innovators and entrepreneurs statewide. This year, he’s organizing a $10 million venture capital fund to support black entrepreneurs with early-stage tech companies. It would be the first dedicated fund in the state for black tech entrepreneurs, and one of 30 nationwide.

Brother John Muhammad and Jabaar Edmonds will introduce their New Image News concept, which is designed to raise the profile of positive people and news about business, innovation and “community” in South St. Pete.

Dr. Cynthia Johnson – head of the Florida SBDC at Pinellas County Economic Development – and Nikki Capehart – St. Petersburg’s Urban Affairs Director - will be on hand to answer questions about a possible partnership to promote the Tampa Bay Innovation Center and to create other business incubator spaces in the community.

Also demoing their concepts are Erica Hardison, Abenah Redwood-Adams and Judith Turner, featuring their One Community Grocery Coop, along with Annie Tyrell, who’s agreed to the notion of a pooled equity investment to expand her retail outlet - Annie’s Beauty Supply - to competitive scale. The latter, if successful, could be applied to other local businesses to help them breakthrough in growth.

Julian Riley of We Care LF, Tiffany Moore of Moore Eventful, and Deborah Figgs-Sanders of Personal Agenda LLC are pitching in to market and organize the event.

“This expo is about ‘vision’ for the future, and using our collective power to move from what we know to what could be, if we support each other,” says April Harley, one of the event’s producers and co-creator of the VISIONDISTRICT concept along with Kory Outlaw. The two head a new consulting practice called HarleyOutlaw which emerged from the One Community planning process.

Attorney Tamara Felton and Bruce Nissen will be available to field questions about the Community Benefit Agreement Policy being spearheaded by The New Deal and the 2020 Plan under the One Community umbrella. Felton and Nissen are Co-Chairs of the year-old CBA Policy Workgroup.

Albert Lee will represent the emerging Qualified Opportunity Fund concept by the Tampa Bay Black Business Investment Corporation where he is CEO.

There to debut the idea for a Districts & Corridors Promotions Plan are Tahisia Scantling of Crossroad Consulting, Veatrice Farrell and Dick Pierce of Deuces Live.

This April, a group of 31 entrepreneurs traveled to Fort Lauderdale to attend the state’s largest annual minority business expo, which was hosted by the Florida State Minority Supplier Development Council at the Broward County Convention Center.

The One Community planning year will come to an end in late June of 2019.

The City’s development chief Alan Delisle commended the effort: “This package of ideas is comprehensive and far reaching. It is a very impressive outcome to a great deal of community outreach and creative thinking. I think it establishes the foundation for years to come for additional job growth and entrepreneurship and it is a very positive compliment to the South St Pete Community Redevelopment Area.”

Pastor Louis Murphy, Sr. says, “This Expo is our way of helping others in the community see the incredible ideas we’ve explored over the past year, and to expand the vision of what we see as possible for St. Petersburg.” Rev. Murphy was a key leader in urging the Kriseman administration to fund the One Community planning process.

“We Support Each Other” became the One Community motto (hashtag #WSEO, penned by Kory Outlaw) in the wake of the group’s Durham trip. Indeed, the One Community planning year has already spawned a host of business contracts and partnerships, forged independently among group members.

Watson Haynes, CEO of Pinellas County Urban League notes “That’s exactly what we hoped for. Young people taking to the helm as leaders of an organized movement for equity. They have exceeded our hopes.”

To emphasize the themes of unity, members of the 2020 Emerging Leaders corps of Millennials will help emcee and direct the April 30th Expo, including Min. Michael Shorter, Jennie Henry, Curtis Blakely, Unisha Bullard, Ashley Green and Kristopher McClendon. McClendon recently represented 2020 & One Community in Tallahassee, as part of the St. Petersburg Chamber advocacy contingent to the capitol.

The Expo is free and open to the public. It takes place April 30th at 5:30 pm at Pinellas Technical College.  To RSVP, visit www.1CommVisionDistrict.com.